Hello, and welcome to my EPL Super Sunday LIVE Coverage, with 4 matches in the EPL today including Manchester United vs Newcastle and Tottenham vs Aston Villa.

I will start with Southampton vs Fulham: LIVE

80 minutes gone, and it is 1-1. Southampton went ahead after only 4 minutes but Fulham have got back into the match in the 70th minute thanks to a low curling shot by Fulham full-back John Arne Riise which took a huge deflection off Southampotn defender Jos Hooiveld.

15:00:
Liverpool vs Stoke City and Tottenham vs Asdton Villa have both STARTED

Here are the teams:

FACT: Goalkeeper Brad Friedel is missing his first EPL match since 2004. The run had to end sometime.

New Fulham midfielder Kieran Richardson shoots inside the box, hitting the ball away from the goalkeeper into the net.

Cruel for Southampton, Fulham lead with 3 minutes plus stoppage time to go.

Southampton have equalised, and Jose Fonte scores his second goal of the day!

Southampton now looking for the win...

90+5: Last minute set pieces for the home side, but the referee blows the whistle to end the match at St Mary's Stadium.

Southampton 2 Fulham 2, with Fulham the happier of the two sides, after conceding first but will be questioning whether they should have kept the lead at 2-1.

25: Stoke midfielder Michael Kightly has got the fist yellow card of the match, still goal-less though.

While I wait for news from Sports Direct Arena between Newcastle and Manchester United, here is the LATEST EPL News.


Arsenal manager Arsene Wenger will reportedly get £35million pounds to spend in the January transfer window, after a good start to the season without spending much in the summer.

He will never spend money for no reason, that is what makes him a great manager.

Chelsea defender Branislav Ivanovic has said that Chelsea have much tougher tests ahead.

Neymar has said that Chelsea midfielder Oscar wants him to join him at The Blues and is a 'very good salesman'.

Liverpool winger Stewart Downing has said that he is 'upset' and 'disappointed' after comments by manager Brendan Rodgers about his attitude.

Manchester Mario Balotelli has been seen boarding a budget airline flight back to Italy.

Manchester United defender and captain Nemanja Vidic has been linked with a move away from Manchester, with Juventus and Barcelona reportedly interested in signing him.

Tottenham have been dominating at home, with Aston Villa having hardly any chances. 0-0 at half-time though.

So, it is goal-less at both Anfield and White Hart Lane... 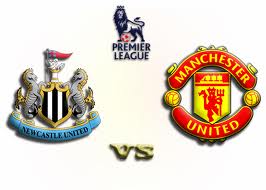 Manchester United start the match with a 4-3-1-2 formation, with Rooney just behind strikers Welbeck and van Persie playing in a deeper role than usual.

Kagawa, Cleverley and Carrick are all behind him, while De Gea keeps the United goalkeeping jersey from the Champions League match against Cluj on Tuesday.

Newcastle continue their good form, after a 3-0 win over French side Bordeaux on Thursday in the Europa League.

Captain Coloccini does NOT start today, so Jonas takes over the captain's duties.

Newcastle play with a traditional 4-4-2 formation, while Demba Ba and Papiss Cisse both start together in attack.

16:00: Referee Howard Webb blows his whistle to start the match at The Sports Direct Arena. Newcastle kick off, and the fans are loud.

3: Shinji Kagawa and Welbeck link-up well before a block gives United a corner.

4: Manchester United continue to pressure Newcastle's defence with a nice cross by Cleverley to van Persie.
van Persie then heads the ball towards defender Jonny Evans inside the box who backheels the ball to Welbeck. Welbeck shoots towards goal....

Comfortable save by Steve Harper.
Weak shot by Welbeck and he should have tested the goalkeeper a bit more and probably scored there.

6: Robin van Persie takes a shot from the far post, before goalkeeper Harper saves the ball with his feet. Corner to United.


7: van Persie whips the ball into the box for defender Jonny Evans who towers over the defenders to head the ball towards goal... GOAL!!!

Manchester United have broken the deadlock away from home within 10 minutes.
9: Newcastle go on the counter attack with winger Hatem Ben Arfa speeding down the wing past two defenders before a tackle by Wayne Rooney gets the ball out for a throw-in.

10: Manchester United right-back Rafael runs down the wing, before unleashing a shot from inside the box..... WHISTLES PAST THE POST!!

11: Newcastle goalkeeper Steve Harper tries to control the ball after a back pass, but Welbeck closes him down well....
Harper falls down and Welbeck shhoots towards goal while off balance.... MISS!!!

Welbeck could have scored twice already within 12 minutes. United should be 3-0 up.

14: The tension is rising inside the stadium, with Newcastle giving away two fouls inside a minute. First Cheick Toite with a late challenge, before Demba Ba sticks his leg out while Tom Cleverley has the ball at his feet.

Free-kick to Manchester United, with Wayne Rooney hitting the ball towards goal.... GREAT SAVE!!! by Steve Harper.

15: Corner to United, with Rooney whipping the ball into the box...

Speaking of defenders scoring, Tottenham have broken the deadlock in the 57th minute, with defender Steven Caulker getting the lead.
1-0 to Spurs.


21: Manchester United midfielder Shinji Kagawa is booked by Howard Webb after a late tackle on Hatem Ben Arfa down the wing, with studs showing.

23: Newcastle's danger man at the minute is Hatem Ben Arfa. He has pace, skill, techinque and can beat defenders with ease.

He is the only player that is actualy giving United trouble. They need to get the ball to him, and quickly.

25: Manchester United defender Jonny Evans is limping off the pitch clutching his knee, with the physio. Looks in real discomfort.

The game is surely over now, with winger Aaron Lennon doubling Tottenham's lead. 2-0 with 20 minutes to go.

33: Newcastle midfielder Cheick Tiote has been booked after a dangerous push on Wayne Rooney.
He got the ball, and was looking for the ball aswell.

34: Newcastle midfielder Yohan Cabaye has a shot from 20 yards out which curls towards goal.... OVER THE BAR!!!

45: The fourth official has signalled for three minutes of stoppage time to be added on.

45+2: Rooney has a shot towards goal hit the side netting.

That will be the last action of the first half.

Newcastle are back in the match, but if they want to salvage something then they need to test David De Gea more.

45: Howard Webb has blown the whistle to start the second half.

Shinji Kagawa OFF
Antonio Valencia ON

59: Wayne Rooney runs into the box before placing the ball towards goal.... SAVED by Steve Harper.

60: Cameras show that Alan Pardew is giving instructions to midfielder Gael Bigirimana, who is getting ready to come on.

Close again by Ben Arfa, but no shave.

Jonas Gutierrez has gone into left-back postion, with Cabaye in-front of Anita and Tiote who are playing as the defensive midfielders.

65: Robin van Persie chips the goalkeeper from close range...., it's a goal but will not count.