EPL News and LIVE Match Commentary of Chelsea vs Liverpool

EPL News:
Arsenal manager Arsene Wenger has said that he would love captain Robin Van Persie to stay at Arsenal for the rest of his career.
Good luck....
Newcastle United boss Alan Pardew insists any club wanting Newcastle's stars will have to break the bank.
Good for you..... Newcastle would not want a repeat of Carroll, Enrique and Barton's transfer moves. 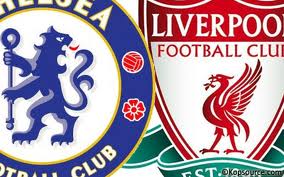 So Meireles, Torres and Andy Carroll all start on the bench today.... Interesting. Fernando Torres will be upset as he is itching to play against his former club.


FACT: Chelsea have failed to score in five of their last seven Premier League games against Liverpool and three of the last four at Stamford Bridge.
FACT: Luis Suarez has won three penalties this season, more than any other player.


0: Chelsea have kicked off the match here at Stamford Bridge as Chelsea take on Liverpool.
3: Liverpool throw-in taken by Jose Enrique.
3: Handball by John Obi Mikel. Free-kick to Liverpool taken by Enrique.
5: Foul by Chelsea defender Branislav Ivanovic on Maxi Rodriguez. Direct free kick taken left-footed by Daniel Agger from own half, resulting in open play.
10: Cross by Chelsea midfielder Florent Malouda, shot by Juan Mata in the six-yard box..... still on the the pitch....
11: Shot from John Obi Mikel from 30 yards...... OVER THE BAR!!!
12: Foul by Chelsea midfielder Ramires on Maxi Rodriguez. Free-kick taken by Charlie Adam.
14: Shot from 6 yards by Liverpool defender..... saved by Petr Cech.
18: Foul by Liverpool midfielder Charlie Adam on David Luiz. Free-kick taken by David Luiz from own half, passed.
23: Cross from Liverpool's Glen Johnson into the box...... SAVED! by Petr Cech.
28: Foul by Liverpool's Charlie Adam on Chelsea striker Didier Drogba.
29: Foul by Liverpool defensive midfielder Lucas Leiva on David Luiz. Yellow card given to Lucas.. He needs to be careful now.....
33: Craig Bellamy with the ball for Liverpool.... he runs into the box and plays the ball to Maxi Rodriguez.... who shoots from 12 yards.... GOAL!!! He breaks the deadlock for Liverpool in the 33rd minute! 1-0 to Liverpool!
37: Chelsea corner taken by Florent Malouda into the box..... Ivanovic heads the ball.... OVER THE BAR!
38: Goal-kick taken by Pepe Reina.
41: Foul by David Luiz on Charlie Adam.... Yellow card given to the Chelsea defender. He needs to time all his tackles now.... Free-kick from 25 yards out.. taken by Luis Suarez who curls the ball over the wall..... OVER THE BAR!
44: Goal-kick taken by Petr Cech.
45: Throw-in taken by Jose Enrique.
45+1: Foul by Liverpool defender Glen Johnson on Chelsea midfielder Florent Malouda. Free-kick crossed by Chelsea striker Didier Drogba from left by-line, clearance by Glen Johnson. Inswinging corner from right by-line taken left-footed by Chelsea's Juan Mata to near post, header by David Luiz (Chelsea) from 6 yards.... MISS!
45+2: The referee blows the whistle for half-time here at Stamford Bridge.
Liverpool are infront at the Bridge and Chelsea lack attacking flair. They are not using Juan Mata to their advantage and Liverpool will feel disappointed as they have not scored more yet.
Tackles have been flying in here at Liverpool can take advantage of Chelsea's slow and sloppy defence.

45: The referee blows the whistle to start the second half here at Stamford Bridge.
CHELSEA SUB:
Daniel Sturridge ON
Mikel OFF
He will add some pace and creativity to Chelsea's squad.... Mikel has made too many mistakes and cost them the goal....

46: Foul by Chelsea midfielder Florent Malouda on Dirk Kuyt. Free-kick drilled by Charlie Adam from 30 yards, MISS!!! Goal kick taken long by Petr Cech.
49: Shot by Chelsea striker Didier Drogba curled right-footed from 18 yards.... MISS!!!. Goal kick taken long by Liverpool goalkeeper Jose Reina.
55: Shot by Chelsea midfielder Florent Malouda from 18 yards... still on the pitch.... comes to Daniel Sturridge from 6 yards out who shoots the ball past Pepe Reina.... GOAL!!! 1-1! Sturridge equalises for Chelsea in the 55th minute.
56: Foul by Liverpool's Charlie Adam on defender Ashley Cole. Free-kick taken by Didier Drogba from left wing, header by Branislav Ivanovic from 6 yards.... FANTASTIC SAVE by Pepe Reina!!
57: Juan Mata with the ball for Chelsea... he shoots from 20 yards out... SAVE by Pepe Reina.
62: Foul by Chelsea midfielder Ramires on Martin Skrtel... Yellow card brandished to Ramires.
64: Foul by Liverpool midfielder Dirt Kuyt on Florent Malouda. Yellow card given to Kuyt. The cards are being rapidly brandished here.
66: LIVERPOOL SUB:
Jordan Henderson ON
Craig Bellamy OFF
70: Overhead kick shot from 12 yards out by Chelsea midfielder Florent Malouda..... MISS!! Goal-kick taken by Pepe Reina.
72: Cross by Chelsea's Florent Malouda into the box for Didier Drgba... he heads the ball... OVER THE BAR!!!
73: Foul by Luis Suarez on John Terry. Free-kick taken by Terry.
77: LIVERPOOL SUB:
Stewart Downing ON
Maxi Rodriguez OFF
79: Foul by Branislav Ivanovic on Luis Suarez. Yellow card given to Ivanovic.
84: Chelsea SUB:
Fernando Torres ON
Raul Meireles ON
Ramires OFF
Didier Drogba OFF
Chelsea's last throw of the dice here....
86: Shot by Liverpool's Dirk Kuyt from 12 yards... MISS!!!. Goal kick taken by Petr Cech.
87: Pass by Charlie Adam into Glen Johnson inside the 16 yard box..... he shoots... GOAL!!!! Liverpool have scored here! Surely that's the winning goal???
89: Shot by Luis Suarez from 40 yards out... OVER THE BAR!! He's wasting time here now... Liverpool are hanging on here....
89: LIVERPOOL SUB:
Andy Carroll ON
Luis Suarez OFF
90+2: Foul by Andy Carroll on John Terry. Free-kick taken by Ashley Cole.
90+2: Raul Meireles shoots from 30 yards.... OVER!
90+3: The referee blows the whistle here at Stamford Bridge.
Liverpool beat home side Chelsea with a late goal by defender Glen Johnson in the 87th minute. Although Chelsea played well in the second half and equalised through Daniel Sturridge, they lacked pace and did not pass the ball to Juan Mata in the first half which cost them. Liverpool deserved to scored more than one in the first half and snatched all three points at the death.
This means that Liverpool are back in 6th place with 22 points only on goal difference from Arsenal in 7th and Chelsea failed to captalize on Newcastle 3-1 loss against City yesterday.
FACT: Liverpool defender Glen Johnson scored the winner against his former club.

FACT: Chelsea have now lost 4 matches this season and are 12 points adrift of EPL leaders City.
Posted by Unknown at 19:27