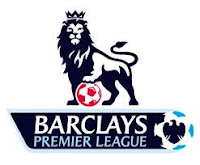 Chelsea 3 Arsenal 5 FT
Frank Lampard scored to break the deadlock in the 14th minute. Robin Van Persie equalised for Arsenal in the 36th minute. Defender John Terry scored just before half-time to make it 2-1. Andre Santos equalised to make it 2-2 in the 49th minute. Theo Walcott put Arsenal in front for the first time in the match in the 56th minute. Chelsea midfielder Juan Mata made it 3-3 in the 81st minute with a 20 yard striker. Robin Van Persie put Arsenal back in front after John Terry slipped and made a mistake. Van Persie completed his hat-trick in the 90th minute to make it 5-3 to Arsenal. This means Arsenal move up to 6th in the table and Chelsea stay 3rd but are slipping behind and are now 9 points behind leaders City.

FACT: This is the first time that Chelsea have conceded 5 at Stamford Bridge since the PL started in 1992.
FACT: Robin Van Persie has scored his second hat-trick of this season.

Everton 0 Manchester United 1 FT
Javier Hernandez scored the only goal of the match in the 17th minute for United. They stay second and put the pressure on rivals City. Everton battled well but could not score or take any chances well. United put last week's 6-1 defeat to rivals City behind them but are not back to their best. Their defence is unstable and athlough they won today, Everton lack strikers and lacked a goal threat throughout the match. If they had faced one of the top six in the EPL, the result would have been different.


Carling Cup Quarter Final Draw:
Arsenal vs Manchester City
Chelsea vs Liverpool
Cardiff vs Blackburn Rovers
Manchester United vs Crystal Palace
Ties to be played on week commencing November 28
﻿EPL's LIVE 15:00pm Kick-offs:
Manchester City vs Wolverhampton Wanderers
Swansea City vs Bolton Wanderers
Norwich City vs Blackburn Rovers
Wigan vs Fulham
Sunderland vs Aston Villa
17:30:
West Bromwich Albion vs Liverpool
FULL TIME:
Manchester City 3 Wolverhampton Wanderers 1
Edin Dzeko, Aleksandar Kolarov and Adam Johnson all scored for City as they beat Wolves art Eastlands. They stay top of the table and are five points clear of rivals United. Stephen Hunt scored a consolation penalty goal for the visitors after Vincent Kompany was sent off for City after a bad challenge on Kevin Doyle.
Swansea City 3 Bolton Wanderers 1
Joe Allen broke the deadlock for Swansea in the 49th minute. Scott Sinclair doubled Swansea's lead in the 60th minute from a penalty. Danny Graham scored an own goal to give Bolton late hope but Danny Graham redeemed himself in the last minute of stoppage time.
Norwich City 3 Blackburn Rovers 3
Norwich salvaged a point at home as they came back from 3-1 down to draw 3-3. Grant Holt scored the late equaliser in the 5th minute of stoppage time with a penalty. Junior Holiett opened the scoring just before half-time with a well struck shot which flew past John Ruddy. Wles striker Steve Morison leveled for Norwich in the 53rd minute but two goals in quick succession from Yakubu and captain Christopher Samba looked to prove a victory for Steve Kean's side. However, City had a lifeline when Bradley Johnson's deflected effort went past Paul Robinson. Norwich had a penalty appeal in the last minute of stoppage time as Steven NZonzi's arm hit the ball when he was a appealing for a free-kick. The referee harshly gave a penalty and substitute Grant Holt buried the ball into the bottom corner of the net. This means that Blackburn are still bottom of the table and Norwich are up into 7th.
Wigan 0 Fulham 2
Moussa Dembele and Clint Dempsey both scored for Fulham as they won their first away win of the season.
Sunderland 2 Aston Villa 2
Stilliyan Petrov scored an early strike to put Villa ahead. Connor Wickham equalised for The Black Cats. Defender Richard Dunne scored a header from a free-kick to put Villa 2-1 up.
Stephane Sessegnon scored a late equaliser to make it 2-2 from an unmarked header.
West Bromwich Albion 0 Liverpool 2
Chalie Adam scored a penalty and Andy Carroll also scored as Liverpool beat West Brom comfortably at The Hawthorns. Charlie Adam put the away side ahead in the 9th minute and a dangerous counter attack ended in Carroll making it 2-0 just before half-time. This means that Liverpool are still 5th (only a point behind Newcastle) and West Brom drop to 13th in the table.
﻿
﻿

FACT: Robin Van Persie has now scored 28 goals this year and 12 this EPL season making him the top goalscorer so far this season.
FACT: Liverpool are now unbeaten in 6 games.
FACT: Bolton have lost 13 out of their last 15 matches.
FACT: More than 3 players played against their old club today: Ashley Cole, Arsenal: Darren Pratley, Swansea and Darren Bent, Sunderland.
FACT: Blackburn have only won 2 out of their last 11 games this season (in Domestic and EPL)
FACT: Chelsea have lost two London Derbies in two weeks: Arsenal and QPR.
FACT: Chelsea have also not kept a clean sheet in 9 EPL matches.
FACT: Wolverhampton Wanderes have not won a match in 8 games.
Tomorrow:
Tottenham Hotspur vs QPR: LIVE from 16:00pm
Monday:
Stoke City vs Newcastle United: LIVE from 20:00pm
EPL News:
Manchester United manager Sir Alex Ferguson admits striker Wayne Rooney will always be "a traitor" in the eyes of Everton.
Manchester United defender Chris Smalling is out for at least a month with a broken foot.
Tottenham Hotspur manager Harry Redknapp thinks QPR boss Neil Warnock could rival him to become the next England manager.
Tottenham striker Roman Pavlyuchenko wants to leave Tottenham due to a lack of first-team action.
Roberto Mancini will become the highest paid EPL manager when City offer him £22million four-year deal as a reward for his improvements.

Fulham striker Bobby Zamora admits he needs to up his game if he is to get back into the England squad.

Roberto Mancini insists he "loves" Adam Johnson and is determined to see him improve.

Lille midfielder Eden Hazard has revealed his desire to move abroad at the end of the season. He says he does not want to stay in Paris. This almost certainly rules out PSG who are situated in Paris. Real Madrid, Manchester United and Arsenal are all interested. Buy him Wenger!!

Tottenham Hotspur midfielder Rafael van der Vaart has told Arsenal not to get carried away with their win over Chelsea and insists that Tottenham are still the best team in north London. No, I disagree.

Liverpool captain and midfielder Steven Gerrard is believed to have picked up a knock in training which subsequently became infected and required medical intervention at a Liverpool hospital on Sunday.
Posted by Unknown at 00:42