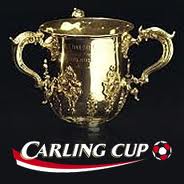 ﻿Yesterday's Carling Cup Last 16 Match Results:
Arsenal 2 Bolton Wanderers 1
Arsenal made 11 changes to the side that beat Stoke 3-1 on Sunday. Bolton however made few changes to the team which were defeated 2-0 against Sunderland on Saturday. They took it very seriously and scored first in the 47th minute due to Fabrice Muamba the former Arsenal youngster. 6 minutes later captain Andrey Arshavin equalised for The Gunners. New signing Chu-Young Park did not take long to make a name for himself at Arsenal as he scored his first senior goal for the club in the 55th minute. Bolton never gave up and had lots of chances and piled on the pressure for Arsenal but in the end the better team won and Arsenal prevailed with a 2-1 comeback win.

﻿
﻿
Manchester United 3 Aldershot 0
United were desperate to get back to winning ways after their 6-1 defeat against rivals City at Old Trafford on Sunday. A small crowd of seven thousand saw United beat League Two side Aldershot comfortably with their second team. Dimitar Berbatov scored first for the defending champions in the 15th minute. Michael Owen scored in the 41st minute to make it 2-0 before half-time. Antonio Valencia made it 3-0 three minutes after the break with a 25 yard strike. United progress to the last 8.

Crystal Palace 2 Southampton 0
Darren Ambrose scored to put Palace in front in the 73rd minute. Jermaine Easter made it 2-0 in the 82nd minute from a penalty.
Cardiff 1 Burnley 0
Joe Mason scored the only goal of the game in the 40th minute to put Championship side Cardiff in the last 8.
CARLING CUP FACTS:
Michael Owen scored his 158th competitive club goal against Aldershot yesterday.
This is the first time that 2 Championship sides have made it to the Carling Cup Quarter Finals since 2008.
Arsenal have consecutively got to the Carling Cup Quarter Finals nine times - which is a record.
TONIGHT's Carling Cup Action:
(All EPL teams)
Stoke City vs Liverpool: LIVE from 19:45pm
Liverpool have Lucas Leiva available again as he is back from his one match suspension. Kenny Daglish is expected to make a number of chancges to his squad but Craig Bellamy may start for The Reds. Defender Daniel Agger came back into the team that drew wtih Norwich following his rib injury and may also start tonight. Defender Jonathan Woodgate may return for Stoke following his month out with a calf injury. Winger Jermaine Pennant will be assessed before he can play against his former club as he has been out for two matches with a hamstring problem. Danny Higginbotham may play some part of the match as part of his return as he has not played since April. Liverpool will want to win and get revenge from their 1-0 loss against Stoke earlier in the season, but they know that it will not be easy. Stoke want to bounce back from the 3-1 loss against Arsenal on Sunday but it will be a very interesting match at The Brittania.
Wolverhampton Wanderers vs Manchester City: LIVE from 19:45pm
Manchester City midfielder Owen Hargeaves is injured with a slight calf problem. Wolves will recall many players including Nenad Milijas, Jody Craddock, Stephen Hunt and George Elokobi to start for them. City will be very shocked if they lose against a weak Wolves team although Roberto Mancini will make changes to the side that beat United 6-1 on Sunday. Wolves will try and bring their game to City and could surprise everyone by winning but it is unlikely.
Everton vs Chelsea: LIVE from 20:00pm
This match comes from Goodison Park as Everton host Chelsea. Chelsea will look to their youngsters and fringe players to start for them. Didier Drogba, Jose Bosingwa and Ashley Cole are all suspended while Raul Meireles is cup-tied and everyone who started their 1-0 loss against QPR on Sunday will be rested or on the bench. Tim Cahill and Louis Saha may both start for Everton and posses a real threat to Chelsea. Victor Anichebe and James McFadden are both still out with a groin problem and fitness issues following an injury respectively. Chelsea will want to progress through to the last 8 and forget about the 1-0 London Derby loss to QPR on Sunday but it may be tough for them and the match may go to extra time and even penalties like the last round.
Blackburn Rovers vs Newcastle United: Live from 20:00pm
This match comes from Ewood Park as Blackburn Rovers entertain EPL highflyers Newcastle. Cheik Tiote and Shola Ameobi are both out due to a knee problem and hamstring injury respectively. Defender Steven Talyor is doubtful due to a broken nose that he suffered in the win against Wigan on Saturday. Blackburn manager Steve Kean will look to play a reasonably strong side and will want a win to boost morale. He is in trouble as he has only won one game out of nine in the EPL and Blackburn find themselves bottom of the table. Blackburn may win after extra-time as Newcastle's injuries may get to them. This maybe a cagey affair with one goal in it or be decided in extra-time/penalties.
EPL NEWS:
Steve Bruce insists that former Sunderland striker Darren Bent could have become one of Sunderland's all-time greats.
Everton midfielder Jack Rodwell feels he is "becoming more of a man" this season.
Manchester City striker Carlos Tevez is reportedly set to appeal after being charged with misconduct by City. He has been fined four week's wages, up to £800,000 and been told 'he may never play for City again' by Roberto Mancini.
Liverpool youngster Jay Spearing knows he has a fight on his hands to get back into the Liverpool midfield due to Liverpool's summer signings.
Wigan goalkeeper Chris Kirkland wants to sign a new contract with the club.
Striker Dirk Kuyt has admitted he is desperate to end his long wait for a trophy at Liverpool and has his eyes on the Carling Cup. That's a realistic target....
FACT: If Liverpool do NOT win anything this season, Dirk Kuyt will be the longest-serving Liverpool player who has NOT won anything at the club in 40 years.
Arsenal defender Thomas Vermaelen's calf injury sustained against Bolton will be assessed today.
He has just come back from an Achiles injury for two months.
I hope this isn't serious. Mertesacker + Vermaelen = V.Good Defence
Blackburn manager Steve Kean insists he does care about the club's fans.
Arsene Wenger has declared Marouane Chamakh will not be leaving Arsenal in January, despite the striker's lack of match action of late.
He needs to start performing WELL then, before he gets my vote of confidence.... -.-


Manchester City defender Kolo Toure is reportedly interested in a move to PSG.
He feels he is not getting enough match time.
QPR's Adel Taarabt has claimed that Paris Saint Germain will try to sign him in January.
Arsenal striker Gervinho admits it is vital that captain Robin van Persie stays at the club.
Manchester United striker Javier Hernandez has signed a new five-year contract which will keep him at Old Trafford until the end of the 2015/16 season, United have announced.

Liverpool midfielder and captain Steven Gerrard believes Tottenham boss Harry Redknapp has proved himself a worthy candidate to succeed Fabio Capello as England manager next year.
He has my vote.

Newcastle are ready to renew their interest in Birmingham's Liam Ridgewell.
Good buy in my opinion.... He doesn't want to play in the Championship and Newcastle need to boost their defnce to get a top 10 finish this season.


Arsenal are keeping their eyes on Sevilla goalkeeper Javi Varas and Lille midfielder Eden Hazard.
Just buy Eden Hazard for £25million and get out of there before Manchester City snap him up just like Chelsea did with Juan Mata..... He is the ideal Nasri replacement.

Manchester United are back on the trail of Spain Under-21 and Atletico Bilbao midfielder Javi Martinez.
Wonderkid. One for the present.
Posted by Unknown at 14:00