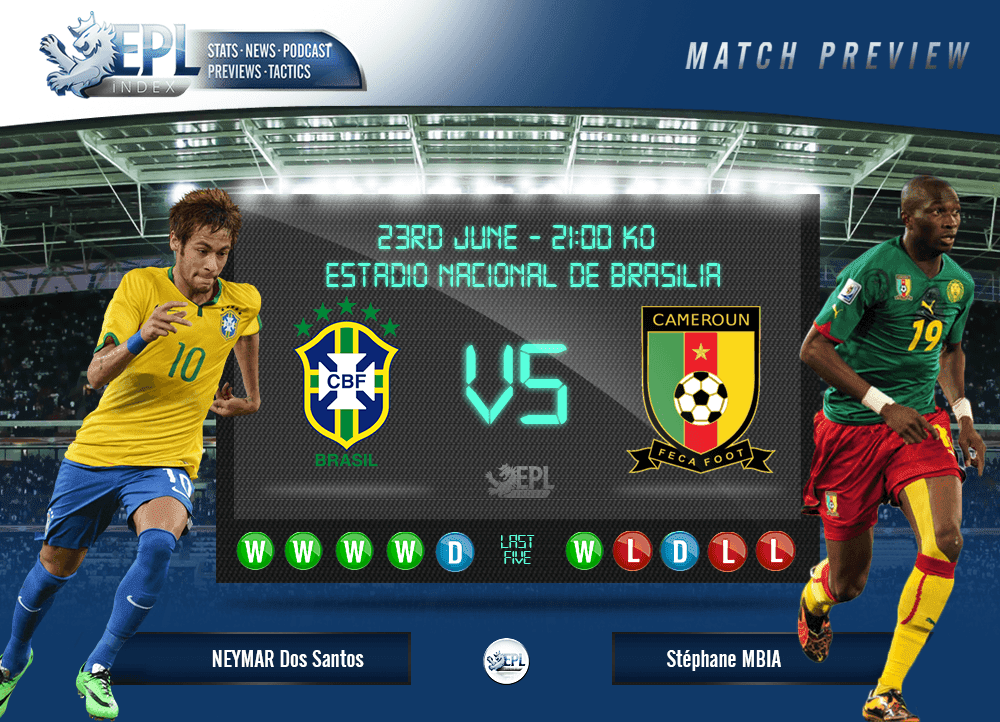 Hello again everyone, and welcome to my latest blog post - where I have a LIVE Commentary from the last group stage match in Group A, as Cameroon look to pull off a massive upset as they play against the group leaders and host nation Brazil, despite the confirmation that they are OUT of the World Cup so therefore playing for pride.

Brazil have been under some pressure and criticism from the media in recent days, after their poor 0-0 draw with Mexico last week they were expected to have dominated the group with ease and there are some questions over whether they have enough quality and tactics to masterclass through the knock-out rounds and win the World Cup this year.

Here are the team line-ups for tonight's match -

21:30 -
30 minutes gone, and it hasn't exactly gone to plan for Brazil.
A fast start to the match from the hosts prompted a neat piece of skill by Barcelona striker Neymar to weave past his markers on the edge of the area before striking the ball first-time into the bottom corner of the net, to take advantage of Cameroon's defensive frailties which have caused a lot of trouble for the African side during this year's World Cup.

FACT: Neymar's goal was his 3rd at this year's World Cup, and also the 100th goal in Brazil's 100th World Cup match.


Then, the unexpected happened. Cameroon took one chance and made the Brazilians pay. A header inside the area from close range thanks to Schalke defender Joel Matip has given Cameroon their first goal at the World Cup, and has made it 1-1. 30 minutes played, and the Brazil supporters sit and wait.


34: GOAL! Brazil back in-front! And Cameroon's defensive in-capabilities are shown again, as Neymar scores his second goal of the night to ensure that Brazil re-take the lead before half-time.

35: That's the young Barcelona forward's 35th goal in 52 appearances for his country; he is now Brazil's 6th leading goal-scorer of all-time.

36: Poor defending again from Cameroon and they are exposed and consequently punished. It's surely obvious to know that you cannot give players time and space on the ball, especially with quality players such as some of those on display today?

38: Still 0-0 in the other match in Group A; between Croatia and Mexico.

40: Currently as it stands, here is how the table looks -
1st place: Brazil with 7 points
2nd place: Mexico with 5 points
3rd place: Croatia with 4 points
4th place: Cameroon with 0 points

42: Well-timed sliding tackle by PSG defender Thiago Silva near the touchline, as Brazil push players back and Cameroon get forward.

43: Yellow card was given to Cameroon midfielder Eyong Enoh in the 11th minute after a late tackle on left-back Marcelo.

45: Just the minute of stoppage time to be added on at the end of the first-half.

45+1: The referee blows his whistle to end the first-half, as Brazil lead by 2 goals to 1.

21:55 - Neymar leads the Golden Boot race with 4 goals in 3 matches so far after his first-half brace against Cameroon tonight.

21:58 - It's obvious that Cameroon cannot still qualify for the knock-out stages regardless of whether they win today but they have to be playing better than they are now with an improved second-half performance.

22:03 - The second-half begins, with a lone substitution from Brazil.

Brazil SUB:
Paulinho OFF
Fernandinho ON

45: Brazil go on the counter attack straight away, but a comical error by Hulk on the flank after doing well to beat his marker means that the ball spins out of play for a goal-kick.

46: CHANCE! Almost 3-1, as Hulk shapes to shoot but delays his strike and is brought down cleanly by left-back Bedimo - before Fred does well to take a shot off and forces a good save from Itandje.

Continued pressure has paid off less than 5 minutes after the start of the second-half, thanks to a goalmouth scramble falling into the path of striker Fred who taps into an empty net after an inviting cross deceives goalkeeper Itandje at the near post and there is no defenders back to clear the danger away.

52: And the replays have shown that Fred's headed tap-in was in-fact offside, but it was too hard to call from the linesman on the far side and if you can't give it, then you should not guess.

53: Brazil lucky, but they have deserved their lead.

56: Half-chance for the Brazilians, a long ball over the top of the Cameroon defence by Neymar finds Hulk on the edge of the area, but the Zenit winger delays his movement and Matip intercepts the attempt and the ball goes out of play for a goal-kick.

Cameroon have had 9 shots, compared to 14 from Brazil.
All of Brazil's shots have been on target, and only 5 on target for the Africans.
And not surprisingly, it is Brazil who are on-top in terms of possession. 59% for the "samba stars."

63: Another substitution for Brazil, with Ramires replacing Hulk for the last 30 minutes or so. Hulk has played okay, but could have arguably scored and made a few assists, if only he did not hesitate when he was on the ball..

66: Some whistles and boos in the crowd, as the pace of the game has slowed down significantly - Brazil are happy to just take this 3-1 lead as a win, Cameroon look down and out.

70: Neymar is brought down near the edge of the area as Cameroon clear the danger after Brazil's counter attack breaks down - but the Barca forward stays down clutching his knee and the ball is put out of play out of respect so that the physio can come on.

71: Neymar is treated by the physio, who apply spray to his injured knee and ankle as he picked up a knock while trying to get past a defender and collided with their trailing leg.

72: Brazil SUB -
Neymar OFF
Willian ON

73: Neymar is consequently replaced by former Chelsea manager Scolari, he does not want his man to be badly injured so does not risk it, with the game already virtually over as a contest.

74: GOAL UPDATE -
Mexico 1 Croatia 0
A header from captain and defender Rafael Marquez has given the Mexicans the lead, they are joint top on 7 points.

76: GOAL UPDATE -
Mexico 2 Croatia 0
Another goal for the South American side, this time from winger Andres Guardado.

80: Second booking of the match goes to Stephane M'Bia, after a late challenge on Luiz Gustavo.

83: An interesting finish in store now, as Mexico are now 3-0! Thanks to a goal from Manchester United striker Javier Hernandez, Brazil are only top of the group on goal-difference currently.

84: GOAL! Great inter-play of passing and quick movement by Brazil on the counter attack, and they make Cameroon pay again after some sloppy defensive play.

Manchester City defensive-midfielder and substitute Fernandinho with the eventual strike, lurking past the last defender to poke past Itandje into the net.

88: Another goal in the Mexico vs Croatia match, but it's for Croatia, thanks to a consolation strike by Perisic. 3-1, and Brazil will play against Chile next in the Last 16.

90: The fourth official has signalled for 4 minutes of stoppage time, as Croatia are down to ten men for the dying moments courtesy of a high boot by Rebic.

90+2: Brazil have not been at their best, but it was obvious before the match that this would not be a fair contest against a team that have simply struggled to defend. The only exception would be Joel Matip.

90+3: Goal-kick from Julio Cesar, and it will be the last kick of the game. Cameroon are already out of the competition, and Brazil have not been forced to hit top gear but have shown flashes of individual brilliance to do the job set for them.

Cameroon 1 Brazil 4
A rout for the Brazilians, despite playing against a far weaker team than you would want to see them up against.


Onwards and upwards to the knock-out rounds, which will be more of an interesting challenge for the host nation - who have arguably had a bumpy ride along in a group they were previously expected to dominate.


Here are the social networking sites which you can follow me on: