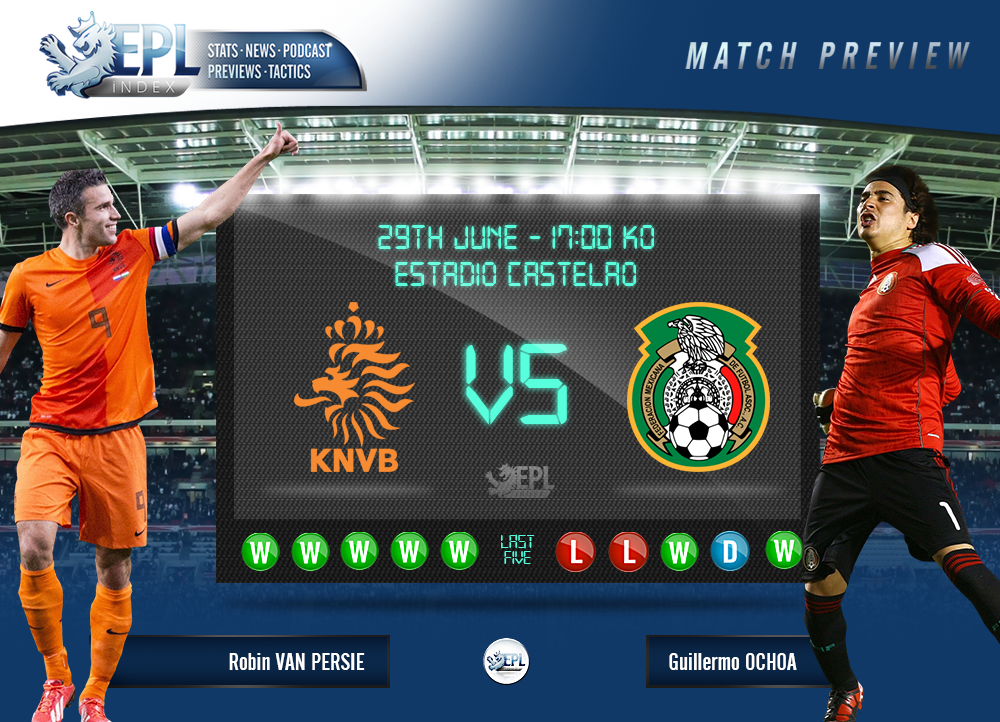 Hello again and welcome to my latest blog post - another LIVE Commentary from the World Cup, as the competition gets firmly underway with the third match of the Last 16.

Brazil have set up an interesting encounter with impressive side Colombia in the quarter-finals; and now it's time for the Dutch to assert themselves as potential World Cup winners.

They play against Mexico, who came second in Brazil's group. Holland will be eager to win, and hopefully better their result in the competition from four years ago.

They were unlucky to finish as runners-up, thanks to a dramatic late extra time winner from Barcelona midfielder Andres Iniesta to give Spain the win.

Holland will be the clear favourites to win today, but Mexico will make it a tough match for them.

Here are the Last 16 matches to be played -

Here are the team line-ups for today's match:

17:00 - Mexico to kick-off the first-half of action in this Last 16, they know today is a crunch match for both sides.

Holland make two changes to the side that beat Chile 2-0 in their last group stage match, as Manchester United striker Robin van Persie returns to the team from suspension.

Mexico will be hoping that they can provide a mini-shock against Holland today, who have been impressive on the counter attack but have defensive frailties ready to be exposed.

1: Mexico kick-off, and here is a potential scenario for the second quarter-final in the World Cup.

IF, and it's an if. But IF Mexico do go onto win today, they will play against either Costa Rica or Greece in the Last 8.

2: First shot of the game comes from Mexico, an ambitious drive from 25 yards out, courtesy of Layun flies over the bar and out of Cillessen's reach.

4: FACT - Mexico have only conceded 1 goal in the tournament, against Brazil. Meanwhile Holland have conceded 3, but only 1 from open play.

6: Good reactions from goalkeeper Cillessen to rush out of his goal to anticipate the danger next to his defenders - good decisionn by the keeper to clear the ball, but it was a poor clearance in the end and Hollan were lucky to evade the danger there.

9: De Jong is replaced by Martins Indi, suspected that he is struggling with a knock or injury of some sort, that he will be unable to continue as a result with.

10: Martins Indi was involved in a clash of his own during one of Holland's group stage matches - he suffered with concussion and was hospitalized, but luckily he has been deemed fit to play today.

13: Half-chance for Mexico, as Layun does well to beat Verhaegh on the flank and cross an inviting delivery into the box - but there are no team-mates in the area and Holland can clear.

15: A counter attack almost results in a chance for the Dutch, Robben does well to weave past his marker before attempting to cross a ball into the box - however the ball bounces off the defender and Mexico can clear.

16: CHANCE! Mexico pass the ball around the box, and the resulting shot is dragged wide by midfielder Herrera. Great opportunity to break the deadlock by the Mexicans, the Dutch have been left off there.

19: PENALTY APPEAL! Mexico will feel aggrieved that they were not given a penalty there, the referee waves away their protests and points to the corner flag, after good control from Herrera to kick the ball over Vlaar's head.

BUT as he goes to keep the ball at his feet, he ends up getting kicked in the head by Vlaar with de Vrij raising a high foot to try and block his attempt on goal.

21: Corner comes of nothing, replays show that there was clear contact by Vlaar on Herrera and luckily, he has not suffered any visible injuries and the game has been allowed to continue.

25: Wijnaldum is currently receiving treatment on the far side, after an accidental clash near the centre circle.

27: The players look tired and very hot, the weather is sunny and humid in Fortaleza today.

Holland manager van Gaal reportedly said that if they do not have a drinks break today, the players will start to hallucinate from the heat.

28: A half-chance from Mexico is comfortably held by goalkeeper Cillessen, as the Holland side push players back into their own half.

29: A couple of loose passes for both sides at the moment, neither side really having a clear-cut chance as of yet.

31: Supporters around the ground are starting to boo; they do not like the tempo that the game is being played at - Holland are eager to keep the ball at their feet, making the ball do the work and passing it across the pitch.

32: COOLING BREAK -
As the temperature in the ground today are above 30 degrees Celsius, the match is required to be halted for 3 minutes as the players are allowed to have a drinks break.

Mexico will be the happier of the two sides, and even though it is not half-time, they have been playing well today.

35: The referee blows his whistle to get the match back underway, still 0-0 with 10 minutes plus stoppages until the end of the first-half.

45: The fourth official has signalled for 4 minutes of stoppage time at the end of the first-half, with Mexico dominating in the final third.

45+1: Penalty appeal? Holland go on the counter attack, with van Persie looking up and finding Robben in the area - the Bayern winger tries to weave past two Mexican defenders and gets sandwiched.

45+2: Robben goes down under the challenge of Moreno and Marquez; and claims a penalty. Moreno has gone down, looking worse for wear as the physio is rushed onto the pitch as a result.

45+3: Painful blow for Moreno, who is having to be stretchered off the pitch by the physios. The replays show that Robben perhaps should have got a penalty there, after clear contact between the two defenders.

45+4: HALF-TIME -
The referee blows his whistle to end the first period of time during the match. 0-0 at the break, and both teams arguably should have had a penalty at either end.

But, Mexico have been the livelier of the two sides so far; and look more likely to score the opening goal of the game in a very hot first period. It has not exactly been a match played at 100 miles an hour, which is understandable given the heat.

BUT, Holland need to sharpen up at the back and hit their opponents on the counter attack - otherwise they could be in for a shock exit.

FACT: Mexico have had 6 shots in the first-half, compared to just one from their European counterparts.

18:03 - The referee blows his whistle to start the second period of the match, as Holland kick off. Mexico with a substitution, as the injured Hector Moreno is replaced by Diego Reyes.

47: GOAL! Mexico in-front! What a super strike by Dos Santos, Cillessen wasn't able to prevent the curling effort from beating him into the bottom corner of the net.


48: The Mexicans run wild as Dos Santos celebrates his goal, and now Holland have to come from behind to win.
52: Sneijder with a free-kick delivery into the box.... no, the free-kick wall does its job and blocks it.

55: SAVED! Peralta with a chance out of nothing, his curling shot towards goal is acrobatically held by Cillessen as Holland get the ball clear.

57: WHAT A STOP BY OCHOA! Mexico are left vulnerable from a set-piece, and a lunging header from defender Stefan de Vrij is blocked by the head of Ochoa, who stands on his line and does well to clear the danger onto the crossbar, before it bounces away to safety.

60: Holland have started to up the ante now, they need a goal and soon.

65: The referee hesitates and almost gives a yellow card, after Depay is hit with a high kick by Aguilar.

66: Offside flag is up against Aquino, who gets past the final Holland defender and almost creates a half-chance - he scores but the linesman puts his flag up for an offside.

67: Goal-kick given by the referee, despite a penalty appeal from some of the Holland players as Robben goes down after a challenge inside the box.

68: Replays show that although there was contact on Robben, he fell to ground theatrically and was probably looking for the foul more than anything.

69: Aguilar is given the first yellow card of the game after a late tackle on the heels of Depay.

70: Holland have a set-piece whipped into the box, but the danger is cleared away and eventually they have a corner. Robben whips a delivery into the box, Ochoa punches clear.

71: Ambitious drive by Sneijder on the edge of the area, but his effort is high and wide of the goal as he had to rush his shot with the oncoming defenders rushing towards him.

73: SAVE! Great save by Ochoa again, this time as Robben has the chance to equalise for Holland after evading the challenge of Marquez before having a low shot towards goal blocked by the legs of the goalkeeper.

75: 15 minutes left for Holland to get back into the match, they have not shown their real qualities today - and "super sub" Hernandez replaces Peralta.
Holland SUB -
Robin van Persie OFF
Klaas-Jan Huntelaar ON

76: COOLING BREAK -
Another water break, coming at the best time possible for Mexico - time for a breather and time to re-group.

80: 10 minutes remaining for Holland; the referee has blown his whistle to restart the match and Mexico will be happy to keep possession now.

81: A real shame that Holland have only started playing properly when they conceded thanks to dos Santos' goal in the early stages of the second half - Ochoa has been superb again for his country today. Candidate for Man of The Match!

83: Time's ticking down, and Holland sure do know it. Mexico defending bravely, the Dutch are getting players forward now.

84: SAVE BY OCHOA AGAIN! Ochoa just keeps delivering the goods - Huntelaar with a close range lunging effort despite being offside, the goalkeeper gets both hands on the shot and parries it away as the linesman flags for offside.

88: GOAL! Holland equalise late on! Harsh on Mexico, who have played well all game but have looked vulnerable from set-pieces and Sneijder makes it count with a thumping shot just inside the box.

Ochoa was unable to stop that strike, he couldn't see the ball in time and in truth it was simply too powerful for him.

89: Sneijder runs over to celebrate with the Holland bench, you can see what it means to him. He was visibly distraught after their final loss to Spain in 2010 - and he may have just given the Dutch a lifeline.

90: The fourth official has signalled for 6 minutes of stoppage time to play; and Holland are dominating now. Mexico need to hold on for extra time at this rate, all of their players are back trying to defend.

90+1: PENALTY! HOLLAND HAVE A PENALTY! Robben does well to weave past three challenges, before he is tripped by captain and defender Rafael Marquez inside the area.

90+2: Marquez can have no complaints for that challenge, and gets booked for his troubles aswell.

90+3: Huntelaar steps up to take the penalty, and Guardado is booked for protesting - he shoots.... GOAL! Holland leave it late, but they are ahead now!
Huntelaar sends Ochoa the wrong way, and it's 2-1 with seconds remaining!

90+5: Mexico are desperate to score now, they just look overwhelmed, having conceded two goals within the space of 5 minutes.

90+6: FULL-TIME -
Holland 2 Mexico 1
Football is a really cruel game. Mexico will be the first to agree with that statement.

Having dominated for the majority of the match, with minutes remaining - they concede two goals in the space of 5 minutes thanks to Sneijder and Huntelaar from the penalty spot.