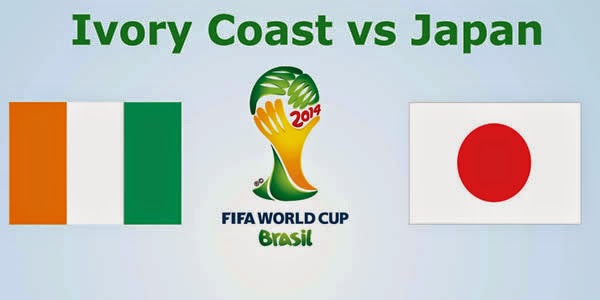 Hello again everyone and welcome to my latest blog post - where I have a match report, review and analysis from a Group C match of the 2014 World Cup in Brazil.

African side Ivory Coast were playing against underdogs from Asia in the form of Japan, who I had predicted to struggle in an interesting group containing dark horses Colombia as well as Greece.

This was the first match of the fourth day in the 2014 World Cup, and was a late start at 2am in the morning in the UK (GMT TIME) On paper, this game was a mis-match, and it would be interesting to see whether or not Ivory Coast would rely on Manchester City defensive-midfielder and country talisman Yaya Toure - who has been struggling with an injury over the past month or so.

Japan have a team with individual talents; Kagawa of Manchester United, Honda of AC Milan and Yoshida who plays for Southampton - it would be interesting to see whether they could pull off a minor shock to win their first game of the tournament.

Here were the team line-ups going into the game, with a familiar-looking Ivorian side -

Ivory Coast were arguably favourites to win the match previously beforehand, their team on paper was much stronger than Japan’s and they are a much more physical side than their opponents, so there was a general expectation that they would comfortably dominate a relatively new Japan side who are currently experimenting with their national side.

Under-rated and therefore an unpredictable team to play against, this could go in Japan’s favour. Especially the fact that the Ivorian defence is shaky under pressure.

It was Ivory Coast who in-fact started the match brightly, holding onto ball possession and rarely making many mistakes in the early going - making Japan chase the ball and tiring them out early on. Tiote and Yaya Toure were controlling the midfield, while Gervinho and Kalou were lurking either side of each other looking for the ball on opposite flanks.

A half-chance fell to Swansea striker Wilfried Bony after 5 minutes, but his effort was blocked and Japan were able to clear the danger partially as the Ivorians continued their assault on their goal.


Every time Japan had the ball at their feet, they looked to counter attack with the pace and good dribbling of Kagawa and Honda, who are technically good players but were overwhelmed by the size and strength of their charging opponents who knew of their qualities and were desperate not to give them time or space on the ball.

The standout player throughout the match for me would have to be Arsenal targeted right-back Serge Aurier, who plays his trade in Ligue 1. He was running the game on the flank, tracking back for his time relentlessly when they lost the ball and his crosses were accurate, drawing defenders towards the ball as well as attracting team-mates for half-chances.

However, the Japanese side did go in-front first, courtesy of a fine finish from Milan’s creative midfielder Keisuke Honda in the 15th minute after weaving past a defender before smashing the ball into the roof of the net. A well-worked goal, from Japan’s first shot of the match proved that you have to take your chances.
FACT: Honda is now the highest-scoring Japanese player at World Cup tournaments, with 3 goals. He has scored or assisted 4 out of the last 5 goals for Japan.

After the breakthrough, the trend changed; Japan began to open up the match and started to stretch the play with quick passing and fluid movement, which is a pleasure to watch from a neutral point of view.

At half-time, the score was 1-0 to Japan. Ivory Coast were aggrieved that they were trailing at the break and for all of their possession and forward runs they did not get anywhere.

Ivory Coast continued to pressure their opponents after the break, and Japan were holding them off. Until the time came for former Chelsea striker Didier Drogba to come on, and his presence was enough for the Ivorians to score two goals within the space of 100 seconds to turn the scoreline into a 2-1 lead.

Japan were stunned, two goals in quick succession had ruined their game plan and they suddenly found themselves chasing the game that they were leading previously.

Full-back Serge Aurier with a superb cross into the box, clinically headed into the net by Swansea striker Wilfried Bony to equalise after 64 minutes.


Then, Roma forward Gervinho gave the Ivorians the lead moments later afterwards thanks to another great ball into the area from Aurier to the near post, another header into the bottom corner of the net.


They finally had their reward for constant pressure throughout.

The Japanese never looked the same after conceding, and despite a number of substitutions from both sides it was Ivory Coast that prevailed in the end, with a slender 2-1 victory in the rainy night sky.

This is how Group C looked after the match: