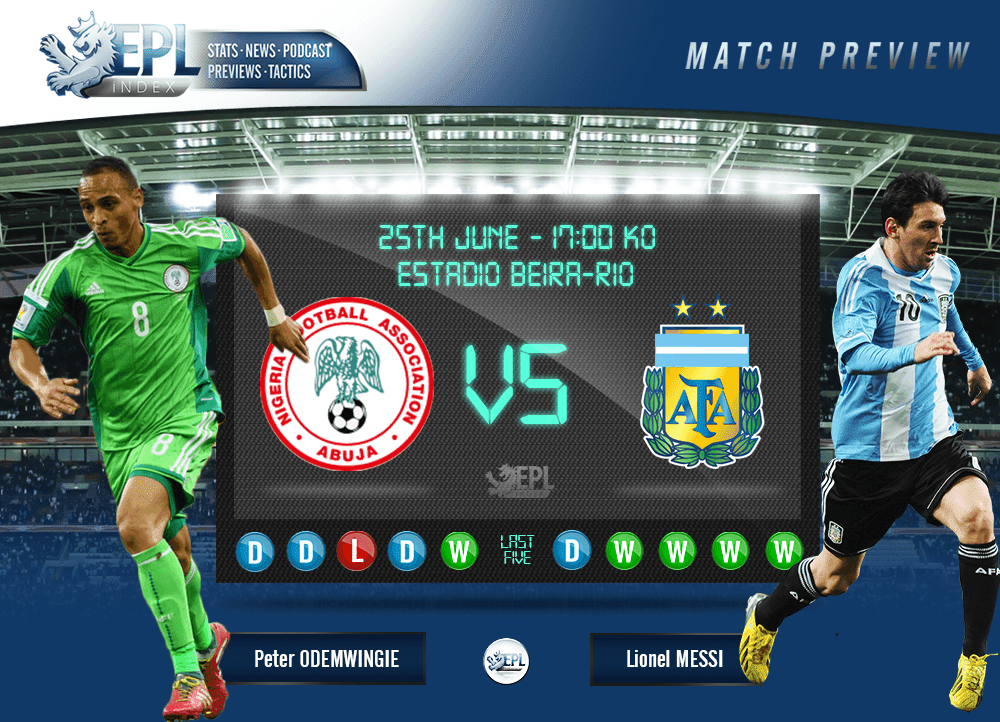 Hello again everyone and welcome to my latest blog post - where I have a live commentary from the final group stage fixtures in Group F as Nigeria play against Argentina and Iran are up against the already knocked out Bosnia.

Here is the current situation in Group F:

Here are the team line-ups and news ahead of both matches in Group F today:

Meanwhile in the other Group F match, between Bosnia and Iran -

17:00 - Both matches have kicked off in Group F, and I will be concentrating on the Nigeria vs Argentina match. Goal updates LIVE from Bosnia vs Iran aswell as the game continues.

3: GOAL! That was quick... Barcelona striker Lionel Messi breaks the deadlock for his third goal in three matches with a rebounded effort from close range which he couldn't miss, after a lofted through ball over the Nigerian defence ended in a shot from di Maria hit the post!


4: GOAL! Another one! 1-1, and Nigeria with a quick response! A wonder strike from Ahmed Musa who curls a super effort past Romero into the bottom corner of the net from the edge of the area. 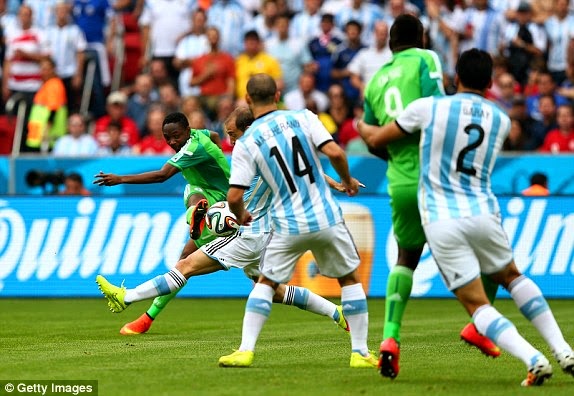 10: First 10 minutes played, and it's already 1-1... Who would have thought it? Nigeria are currently progressing through to the Last 16, along with the already qualified Argentina.

11: Iran vs Bosnia is still 0-0, and Iran need to win and hope that Argentina also do if they are to stand any chance of progressing to the knock-out rounds.

13: Nigeria are defending well, doing their best to ensure that Argentina have limited space and time on the ball when they are in their half - they know the damage that could be done.

16: First corner of the match for Argentina, whipped into the box by Messi but no Argentina players are quick enough to react and goalkeeper Enyeama jumps highest to comfortably catch the ball.

19: Great free-kick delivery by Messi into the area - danger is averted thanks to a diving header towards Enyeama's path.

22: Free-kick given to Nigeria after Gago tussles aggressively with Oshaniwa and leaves the defender in a heap on the ground.

23: GOAL UPDATE -
Good news for Nigeria, not so much for Iran though. Bosnia are 1-0 up, thanks to a strike from Manchester City striker Edin Dzeko.

Bosnia are already out of the competition after back-to-back defeats, but they could have an effect on who goes through.

26: An ambitious long-range effort from Stoke City striker Peter Odemwingie, from 25 yards out - but his shot flies over Romero's goal and Argentina have a goal-kick.

29: CHANCE! Di Maria with a fizzing power strike from 25 yards out, Enyeama does well to dive to his left and parry the shot away and out for a corner.

31: Enyeama goes down under an accidentally elbow into the stomach from Higuain, as he jumps high with his arms above his body to try and catch a corner delivery.

33: Higuain protests his innocence, the referee delays the match momentarily as Enyeama gets up to his feet and no card is shown for the Napoli striker.

35: Argentina have dominated the match in terms of possession, and passes completed - especially in the final third. Making Nigeria work for the ball, which forces them to make mistakes
with their backs to goal.

36: Oh dear. It seems as though there is an injury problem for Manchester City striker Sergio Aguero, who has had an injury-plagued season in England and is clutching his leg on the ground away from the action. The referee stops play, so that Aguero can receive treatment from the physios.

38: A real shame for Aguero, who limps off the pitch looking disappointed - perhaps a muscular injury for the City player.

40: Argentina are continuing to keep up the pressure on Nigeria now, the question is whether Nigeria will be able to hold out for the rest of the match.

42: Clumsy tackle by Chelsea midfielder John Obi Mikel, who clatters into the side of Lavezzi near the edge of the area.

43: A free-kick in a dangerous position for Messi, who stands over it and waits for the referee's whistle.

44: CHANCE! Messi's free-kick is well struck, over the wall and was goal-bound - but a good diving save from Enyeama near the top corner of the net ensures that the score is still 1-1.

45: Another free-kick for Argentina, this time from slightly closer range for Messi to take. 2 minutes of stoppage time to be added on, can the magic man conjure up another goal on the stroke of half-time?

45+1: GOAL! Yes he can! Lionel Messi makes it 2-1 before half-time, with a sensational free-kick into the top corner with Enyeama desperately scrambling to his left. What a goal, his 4th of the competition!

45+2: Nigeria are going to have to come from behind again in this match, 2-1 down at half-time.

18:04 - Second-half has begun, no substitutions as Nigeria kick off.

46: GOAL! And Nigeria equalise again, thanks to Ahmed Musa yet again! Great 1-2 pass between him and Emenike on the edge of the area, before he beat both defenders to slot past Romero from close range!

48: Omeruo with a late sliding challenge on Lavezzi near the edge of the area, and the referee brandishes a yellow card for the defender, despite him protesting that Lavezzi made the most of the tackle.

49: Enyeama is called into action again, an excellent strike by Di Maria is parried over the bar.

50: GOAL! Argentina make it 3-2! A headed effort from defender Marcus Rojo, and the Argentinians are back in-front again.

51: Poor defensive man-marking by Nigeria, they just ball-watch as Rojo pounces on the corner delivery to head past a static Enyeama, who probably should have done better with that.

52: Second yellow card of the match goes to Nigerian defender Oshaniwa after clattering through Lavezzi's legs and leaving the PSG winger on the floor in a heap.

53: FACT - Nigeria have become the first African nation to score more than once against Argentina in a World Cup.

54: Great dribbling run by Messi, who beats two Nigerian defenders with pace before threading through a neat pass across towards Higuain, who latches onto the through ball but his resulting shot is blocked by the oncoming run by Enyeama, who comes out quickly to block Higuain's shot.

55: Would have been a great assist by Messi there, the weight on the pass and the movement by him into the area was simply perfect.

56: Nigeria need to tighten up their defence and hope that they are clinical again on the counter attack if they want to get a result out of this match, it seems as though they are just relying on Musa!

57: Not had many clear-cut chances apart from the two goals, and find themselves 3-2 down against a rampant Argentinian side.

The crowd in Porto Alegre today has helped the atmosphere, both sets of supporters are singing loud and proud - especially Argentina, who are convinced that this is their year.

58: Now it's time for Iran to respond. They are currently 1-0 down to Bosnia, and as it stands they are going to be knocked out - unless they can win today and Argentina keep up their scoreline at the minute.

62: Messi jogs off the pitch to a warm round of applause around the ground, having scored twice and stealing the show once more. He is not injured, but will be rested for the knock-out rounds.

63: Injury concern for Nigeria, as midfielder Michael Babatunde is on the ground clutching his arm. The physio have rushed onto the field and he is currently being treated.

64: Babatunde will not continue, replays show that a powerful shot by his team-mate Onazi hit his arm, and he has been down ever since.

66: Nigeria replace Babatunde with Uchebo, who is a tall and strong looking player who could be vital for set-pieces and tracking back for his team. 3-2 still.

73: CHANCE! Nigeria almost equalise again, and it's Musa again! Great defensive work by Onazi to win the ball back - passes the ball across to Odemwingie who swings a cross into the area.

Musa shapes to shoot, and Manchester City full-back Pablo Zabaleta instinctively runs into his path to block the attempted shot.

74: Zabaleta is clattered afterwards, but not before he puts Musa off taking the shot as the Nigerian's effort is well wide over the bar.

76: Good defensive work by Argentina as Nigeria attempt to score again, but clear the danger away.

77: CHANCE! A well-worked free-kick routine on the edge of the area between Di Maria and Lavezzi sees the latter have a shot parried by Enyeama, out for a corner.

78: Superb sliding tackle by Zabaleta to race back towards his own goal and block the attempted shot from Ahmed Musa, who runs past the last defender after Mascherano loses ball possession in a dangerous area.

79: CHANCE! Argentina almost kill the game off, after a power header from Benfica defender Ezequiel Garay just trickles wide of Enyeama's goal, as the Lille goalkeeper stands rooted to the spot.

82: GOAL UPDATE - Bosnia 2 Iran 1. Reza Ghoochannejhad has halved the deficit, but is it too late for the Iranians now? 8 minutes plus stoppages for them to get back into the match..

83: GOAL UPDATE - Bosnia 3 Iran 1. Okay, it's virtually game over now. Avdija Vrsajevic with the goal, which has killed off Iran's hopes of qualifying for the knock-out rounds.

85: 5 minutes plus stoppages for Nigeria to grab another equaliser, can they do it?

86: Just a few minutes remain, as Nigeria keep up the pressure on Argentina's goal.
Meanwhile the Argentinians are preparing for a substitution.

88: Lazio midfielder Lucas Biglia is walking towards the touchline, getting ready to come on for the final few minutes of the match. Waiting for the ball to go out of play for the sub to take place.

89: An ambitious long-range effort from Mascherano is comfortably smothered by Enyeama.

90: The fourth official has signalled for 4 minutes of stoppage time.
Argentina SUB -
Gonzalo Higuain OFF
Lucas Biglia ON

90+1: Imagine if Argentina went on to win the World Cup, in Brazil's home country. Wow.

90+2: Currently, they are set for a Last 16 tie with either Ecuador or Switzerland, based on the results in Group E tonight.

90+4: The referee blows his whistle to end the match. And there it is!

Argentina and Nigeria have both now qualified for the Last 16, after an interesting 5-goal thriller in Porto Alegre today.

And after a solid display from both sides, Barcelona striker Lionel Messi steals the show again with two goals and a superb performance from the magician-like man. Celebrated his 27th birthday yesterday, what a birthday present that is.
Posted by Unknown at 17:46