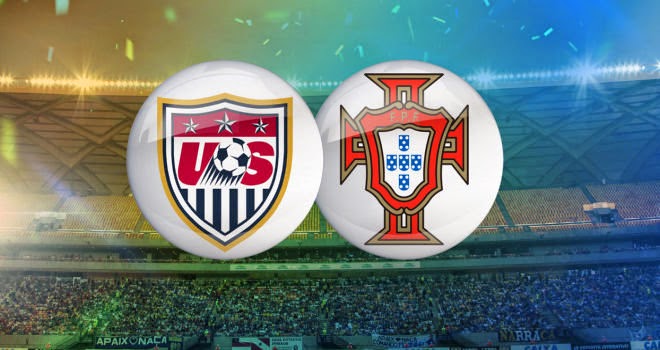 USA vs Portugal was the second group stage match in Group G, as the Americans were up against Portugal - if the Portuguese were to lose this game, they would be mathematically out of the World Cup based on their thrashing at the hands of Germany in the opening game.

Here were the team line-ups for the match yesterday night:

An intriguing watch in Manaus saw an attendance of just under 40,000 supporters to watch the interesting spectacle in a must-win match for Portugal.

Ronaldo was among a strong Portuguese line-up, with the notable absence of fellow Real Madrid team-mate Pepe, who was sent off in their 4-0 defeat against Germany for a headbutt on Thomas Muller.

It did not take long for the opening goal of the game, with Manchester United winger Nani breaking the deadlock after just 5 minutes thanks to a poor clearance from a low ball into the area by Veloso fell straight into his path.

Despite going down early in the first-half, the USA were eager to ensure that their heads did not drop, knowing that they still had time to pull back a positive result after a slow start to the match.

They passed the ball well in their own half as they did their best to frustrate Portugal, and had a few half-chances as Sevilla goalkeeper Beto had to be fully concentrated to avoid conceding in the first period.

The USA were dangerous from set-pieces and half-chances, and were very much still in the match as striker Helder Postiga was substituted after 15 minutes (injury).

And at the half-time interval, it was the Portuguese who were leading albeit with a slender 1-0 scoreline despite intense pressure from the Americans, eager to continue from their uplifting 2-1 win over Ghana.

They eventually took their chance and equalised in the second-half, thanks to a beautifully-struck long-range effort from defensive midfielder Jermaine Jones, whose 25 yard curling effort was beyond goalkeeper Beto who could only stand and watch in dispair as the ball hit the back of the net.

After Jones' goal, the momentum was with the USA as they were eager to score again and take the lead.

Despite a few half-chances for Portugal, followed by substitutions from both sides, it was in-fact the Americans who made it 2-1, with just under 10 minutes to play thanks to captain and striker Clint Dempsey. Who else?

FACT: That was Dempsey's 2nd goal in 2 matches at this year's World Cup.

Arguably luckily fell to the former Fulham midfielder, but he will take it all the same - the ball fell into his path, he chested the ball down into the net as Beto looked on helpless after a lack of defending from Dempsey.

But then late drama struck. With 5 minutes of stoppage time to be added on, the USA were defending for their lives as Portugal cranked up the pressure and pushed everyone forward into their half.

The USA had played well throughout but were tired, and then with 30 seconds to go, Portugal equalised. A great cross into the box by Ronaldo was clinically finished with a diving header by substitute Varela - with the last kick of the game to end the match as a 2-2 draw.

Portugal not out just yet, so it would mean that it would come down to their remaining group stage fixture against Ghana. Unlucky from the USA - played well but their defensive naivety cost them in the dying moments of the match, despite being virtually through to the knock-outs.
Posted by Unknown at 21:04